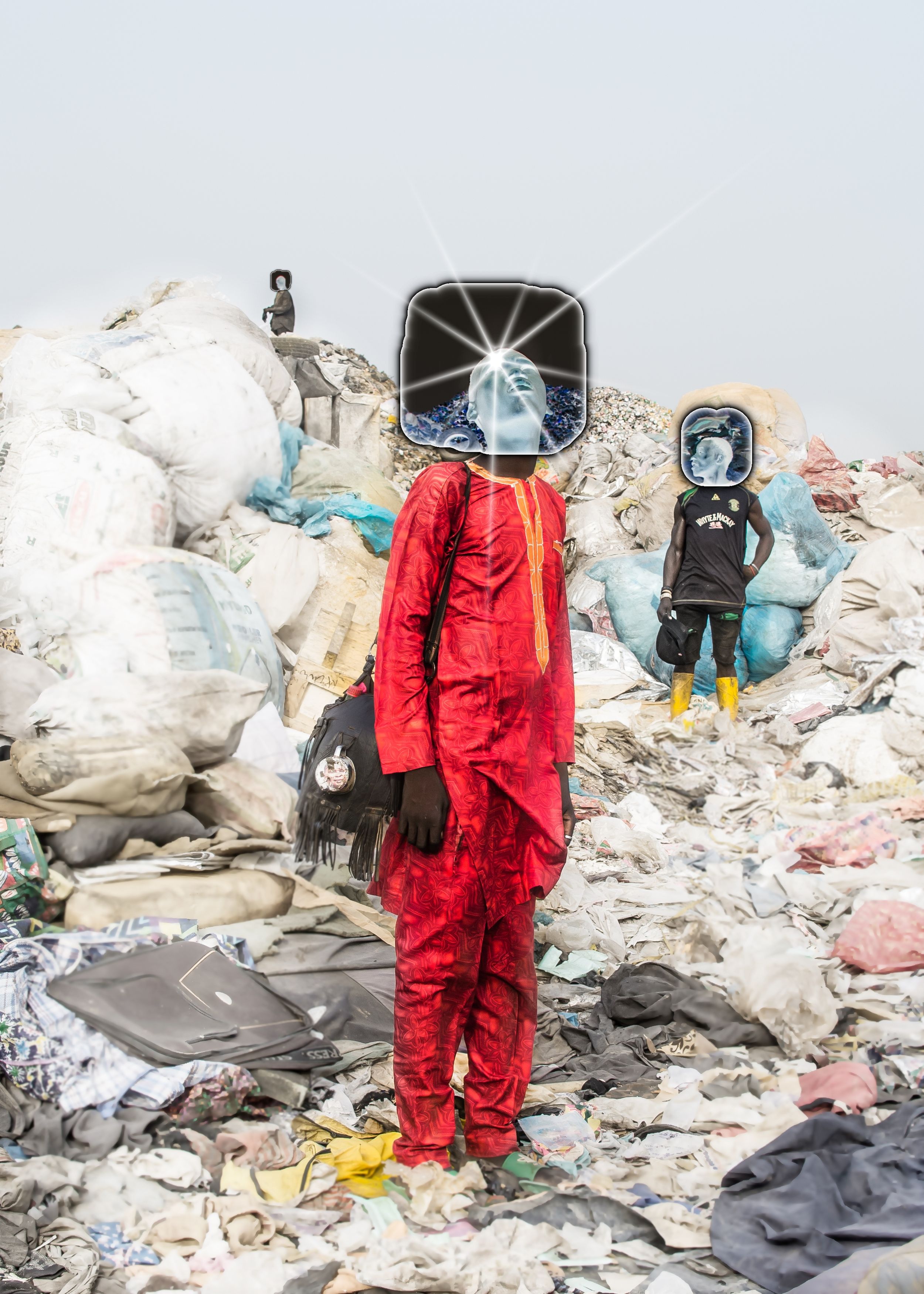 The exhibition Contested Landscapes is part of the Biennale fur aktuelle Fotografie for which I compiled a total of six exhibitions under the title From Where I Stand. The title refers to the position the artists take within the topics they investigate and depict. Although taking a stand is a strong expression and suggests an unshakeable position, the artists want to invite the public to look with them at certain developments and situations that are taking place somewhere in the world at the moment. So that we, as viewers, can form our own opinions based on the visual information and the experience of the work in the exhibition.

The exhibition Contested Landscapes revolves around the notion of the value of nature. A landscape can be seen from the perspective of its economic value, as the earth's resources are needed to maintain our current standard of living. However, there are more and more voices calling for the ecological value of a landscape to be considered. In some landscapes, the balance already seems irreparably damaged, but what to do with those parts of nature for which it is not yet too late? How do we shape landscapes and at what cost? How can an ecological system under the influence of many forces find a new balance? In the works exhibited, we walk through landscapes in Peru, Ecuador, Germany, China, Sweden, Nigeria, Austria and Denmark, to reflect on these questions.

In the following text, I will walk through the visual stories of the exhibiting artists and connect them as one landscape that calls on humans to step back and experience the complexity of the changes in our way of life that we must make if we are to restore the balance between humans and nature.

Lisa Barnard's project The Canary and the Hammer (2019) starts with an enlarged print of a red-colored rock formation which masks the entrance to the fair trade Stromani gold mine in Peru. Opposite this wall, the story about the so-called pallequeras unfolds. Female workers who scrape the stony waste that comes out of the mine with small hammers, looking for pieces of gold to sell. They are not allowed to descend into the mine because they would bring bad luck according to myths surrounding the extraction of the prosperous and highly valued gold mineral. Barnard wanted to give value back to these women who earn a living under difficult circumstances. As a reference to the exploitation of the American continent and following in the footsteps of Edward S. Curtis, who at the end of the 19th century made gold tones of the "North American Indians", she supported the portraits with gold leaves from the mining company. In doing so she shapes the photographic representations of the pallequeras and connects them with the long history of imperialism and capitalism that keeps the gold running over our world.

In a further chapter of the project, prints of intense colors and a text panel talk about how e-waste, such as telephones, computers and televisions, is shipped in great amounts from the West to the port of Hong-Kong. From there, many of the goods disappear further into the country where they are decomposed to regain the valuable metals such as gold. This process often involves unsafe methods for the workers involved. The gold returns as jewelry to be sold in Hong Kong.

Global trade of goods in the opposite direction, from China to the West, is featuring in the project China Express (2021) of Katja Stuke and Oliver Sieber who are with their practice based in Düsseldorf. As part of their long-term project Cartographique Dynamique they have mapped the New Silk Road which stretches out via the ports of Mannheim, Duisburg and Chongqing from Germany to China. A huge overland infrastructure has been built to transport cheap materials and consumer goods from the east to the west. The containers often return empty. Stuke and Sieber are interested in mapping these global activities that shape our societies, our material needs and the exchange between countries.

The interdependence between people, goods, cities and capital is strongly expressed in the individual series of the project such as the portrayal of their own products that are "made in China". The impact on the cities and the surrounding landscape of the ports is observed in the so-called photo walks they made in Mannheim and Chongqing. Due to the Covid-19 pandemic, many trains could not run, and containers were stored for long periods of time. The same thing is happening now due to the war in Ukraine: the newly planned train from Mannheim has been stopped until further notice.[1]

The inner port of Mannheim is just one step away of the Living Forest where the Kichwa people live, deep in the Ecuadorian Amazon. For his project Secret Sarayaku (2021), Misha Vallejo Prut spent a long time with this community, for which he had to give something in return. After all, the philosophy of the Living Forest and being allowed to be part of it is based on reciprocity: if you take something from nature, you have to give something back, as this is the only way to keep the ecological system of the forest in balance. For this reason, Misha led a workshop for the children of the community by portraying them on Polaroids, and he was surprised how at that age they already feel deeply involved in the philosophy of the living forest and how they express it through their colorful drawings on their own portraits. The delicate balance of forest and man is symbolized by the light and small air currents that set the hanging installation in motion.

From the Amazon, where the Kichwa people took their own government to court in 2012 to successfully protect their living environment, we walk to the makeshift village of the Bola Bola community on the Olusoson landslide in Lagos, Nigeria. As a former ICT specialist who looked out over this dynamic area from his office, Aadesokan currently maps the area to show how migration and waste are linked for his ongoing project Waste Identity – Bola Bola Living (2020). Most of the people who earn their living collecting plastic and other waste, which is recycled in factories near the landslide, come from northern Nigeria and have come to the capital for work.

As a counterpart to Aadesokan's project, another vast landscape is depicted and mapped. Awoiska van der Molen's audiovisual installation The Living Mountain (2022) shows the grand landscapes of the Tyrolean Alps in Austria, the homeland of Thomas Larcher, composer of the accompanying music. In this compelling work, Van der Molen's atmospheric black-and-white photography and the experimental score merge as often as they collide, revealing the value of nature in all its monumentality. The promise of untouched nature is close at hand, and it is appealing to lose ourselves in a sensory installation like this, which Van der Molen is making for the first time in her long photographic career.

Moving diagonally through the space, we come to Rune Peitersen's collection of maps, books and photographs from his family archive. The sequence of notes, interspersed with images of a sand, sea and dune landscape in the north of Denmark, is an exploration of the area around the village of Raabjerg. Amidst this moving dune landscape, the white village church, where his great-grandfather bought a holiday home a century ago, is a beacon in a landscape that is subject to shifting ideas and attitudes of the community, the government and others who have felt the need to control this landscape and shape it to their own needs. In the adjoining video room, Peitersen outlines in the 30-minute video RAABJERG (2022) these slow changes that this particular area has undergone in roughly the last 700 years. Today, the family still goes on holiday here, and the most recent policy implemented is aimed at preserving the landscape. The question arises as to which landscape should be preserved, because the area has had so many different landscapes and nature.

Next to the shifting dune landscape, we approach a wall-to-wall installation of blue cloths that seem to float freely in the air, enveloped in a soft green light. Viriditas XXI (2022) by Małgorzata Stankiewicz consists of 21 satellite images of the water and coastline of the Swedish island of Gotland. She created an experiential work to address the lack of oxygen in the Baltic Sea caused by industrial waste discharges. Because of these discharges, cyanobacteria now cover the surface of the sea, stifling underwater life. By making cyanotypes, a photographic process using sunlight, the blue color becomes stable, as stable as the layer of blue green algae if we do not take measures. The cyanotypes were then digitized and printed on sustainably produced silk canvases, which are bathed in green light so that they reabsorb the color of life.

Green as the colour of life is also central to the exhibition's final project. Near the blue floating canvases, we come across two photographs of former quarries in Dali, China. The rocks are covered with green nets that protect the layer of semi-artificial red earth. In this way, the aim is to restore nature in the quarries. In other images of Yan Wang Preston’s project Forest (2010-2017), we feel and experience the pain of old trees when they are uprooted and planted in another place. This is done to green the immediate living environment for the people who migrate to the newly built cities in China. Preston found curious choices such as planting trees unsuitable for a particular climate zone. Initially, Preston was alarmed by these replanting strategies. Gradually, however, her concern changed to a more optimistic thought, namely that the fact that people need nature and greenery close to their homes is at least taken seriously. Green is the color of life, and everyone needs access to it. Even the fake tree Goldie she photographed in 2017 and which is composed of a large number of different trees, has survived and serves as a view from an apartment building. Goldie is wrapped in a golden blanket, to keep the individual trees together, a color that is echoing the search for gold of Lisa Barnard's exploration with which this exhibition began. 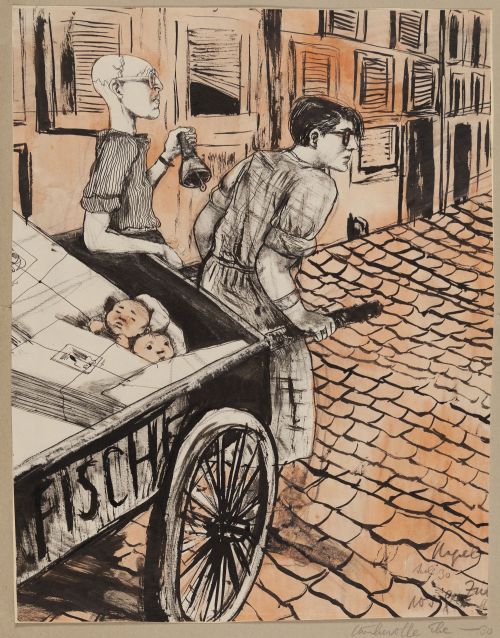 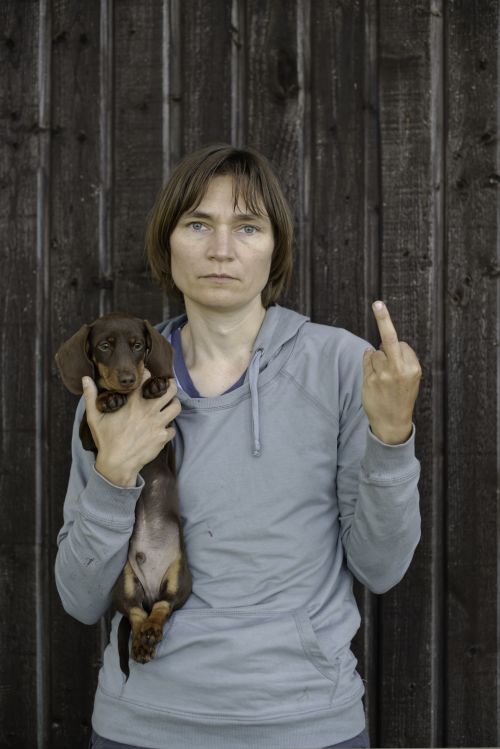 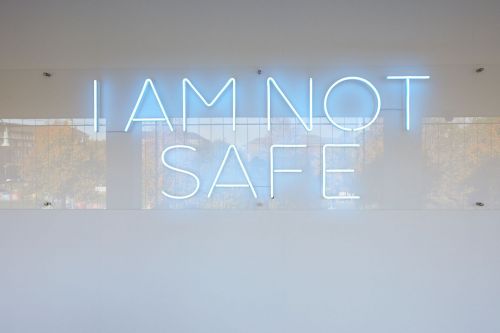 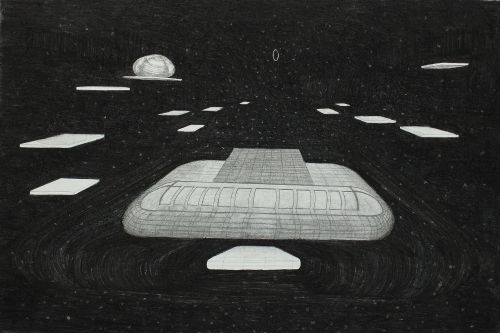